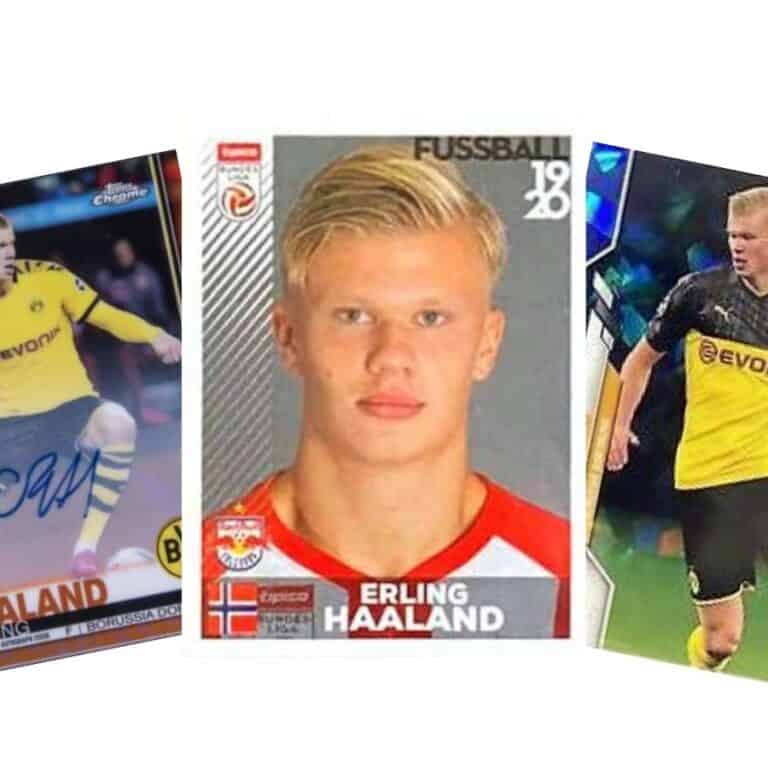 Erling Haaland has become a huge name in soccer, and the sports card hobby in recent times.

It’s fair to say the Norwegian forward (born in July 2000) is a goal-machine, and recognized now as one of the top soccer players in the world.

Erling Haaland’s rookie season was the 2016-17 season, at the age of 16 for Norwegian side Bryne.

The big, powerful and explosive Haaland started really catching the attention of the masses during the 2019-20 season – Shortly after scoring 9 goals in a single game for Norway’s under 19 side, Haaland started putting in some very impressive performances for his club at the time, Red Ball Salzburg in Austria.

His goal scoring numbers were matching the most experienced and best forwards in the world, and he notably became the first ever teenager to score in 5 consecutive UEFA Champions League games.

Midway through that breakthrough season in 2019-20, Haaland transferred to German side Borussia Dortmund, who have gained a reputation for developing young players, with potential, into top players. He went on to win the European Golden Boy award at the end of that season.

His numbers have remained very good for Borussia Dortmund, and he’s now wanted by every one of soccer’s biggest teams. Right now he’s up there as one of the best young players in the world, with Kylian Mbappe.

Naturally, his rapid rise in the sport has also made him popular in the soccer card hobby, some of his earlier cards are hard to get hold of and very valuable. In 2021, one of his autographed Topps cards sold for an eye watering $125,000.

Here’s a list of some of Erling Haaland’s most valuable soccer cards: 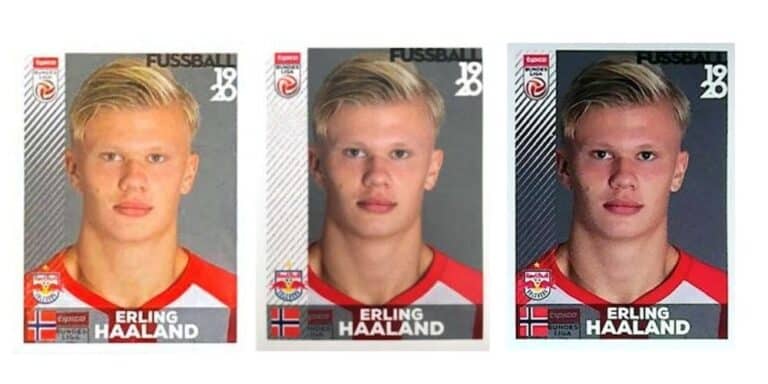 Although this has had some reprints since the original, the 2019 Panini Fussball sticker is considered Erling Haaland’s true rookie card, because it was issued before any other card or sticker of his.

As with most Panini soccer stickers, the design shows a basic head and shoulder image of Haaland wearing an RB Salzburg jersey.

There are some subtle differences in the designs of the reprints, compared to the original. The original is on the left of the 3 designs pictured above, with the 2 reprints in the middle and on the right of the 3.

The original print will definitely hold more value long term, because it is the true rookie. While the reprints are still considered versions of the true rookie, they did release later and they are slightly different in design – however, I still believe they’ll hold good value long term as well.

Other Valuable Erling Haaland Cards To Look Out For 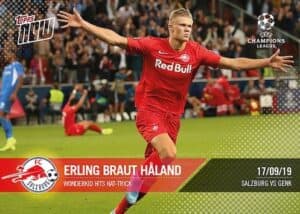 Topps released a Now card for Haaland after he scored 3 goals in the Champions League against Belgian side, Genk.

The picture shows Haaland celebrating one of his goals with the caption ‘wonderkid hits hat-trick’.

The Topps Now cards are print-to-order, and only 178 were printed, so it’s really hard to get hold of, which only adds to its value. 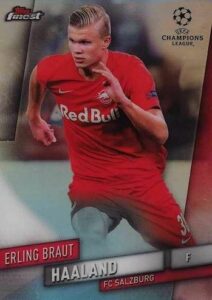 Another card released during the 2019-20 breakthrough season is the Topps Finest Champions League card.

A popular and sought after card that, again, shows Haaland in action wearing a Red Bull Salzburg Jersey for the base card and refractors, however the autograph card switches image to show Erling in action For Borussia Dortmund after his transfer. 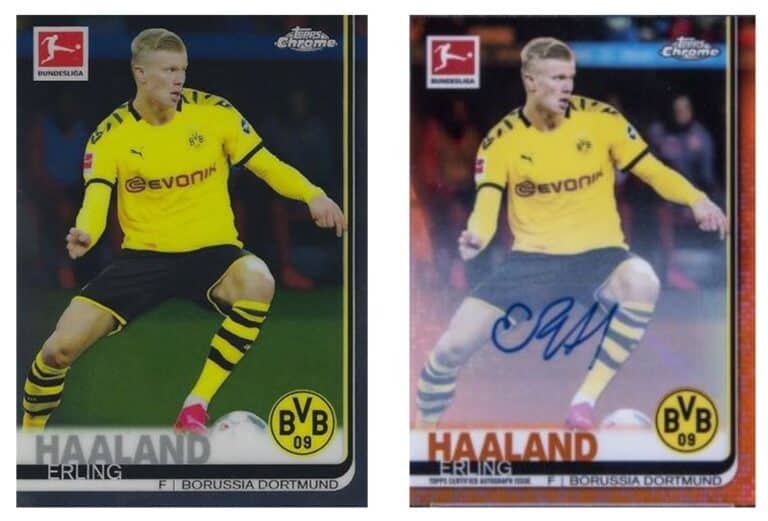 The 2019 Topps Chrome Haaland card is one of, if not the most popular Haaland card right now, especially the refractor versions.

It shows Erling in action with the ball for Borussia Dortmund – It’s a clean and nice looking card.

The card has a few different parallels – Green Refractor (/99), Gold Refractor (/50), Orange Refractor (/25), Red Refractor (/10) and SuperFractor (1/1). There are also autographed versions, it’s an auto card (pictured above on the right) that sold for $125k in 2021, making it one of the most valuable soccer cards ever.

The base card holds value, but I think the parallels for this card are some of the best soccer card investments right now, it’s already hugely popular and valuable, but I think it has massive further potential for the future. 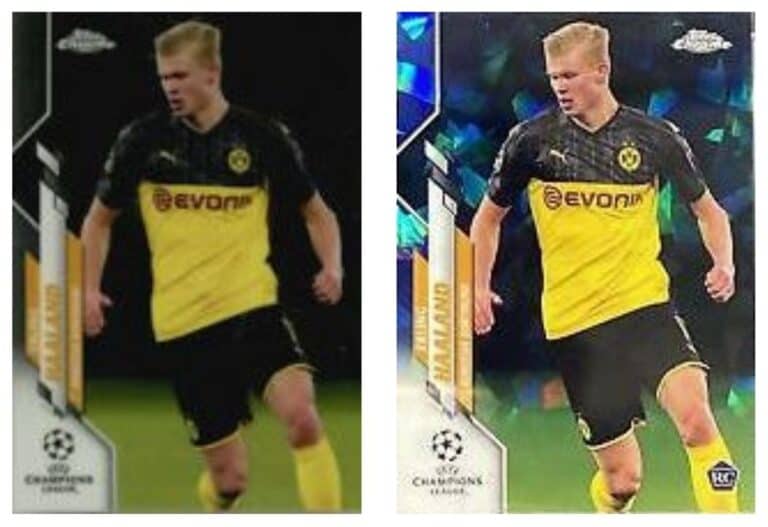 Topps also released a chrome Champions League card in 2019, which is also very popular with collectors.

There are two variations of this card, which are virtually the same, with some minor differences – The standard card (pictured on the left above) has its own parallels and the Sapphire Edition (pictured above on the right) also has parallels.

The difference between the two is with the surface ‘finish’ on the card and also the Sapphire Edition card includes an ‘RC’ rookie card symbol, which is strange because not only was it released after the standard card, but it’s also years into Haaland’s career. 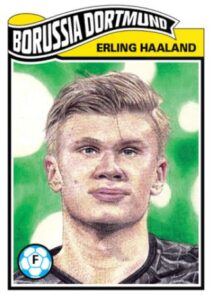 Another UEFA Champions League Haaland card released by Topps, is his UCL Living card from 2020.

The UCL Living set offers something different for collectors, with artistic drawing style designs of players, and they’re generally popular.

Similar to the Topps Now cards, they’re print-to-order, and the print run for this card was surprisingly quite low – with 1,988 printed.

Aside from the likes of Cristiano Ronaldo and Lionel Messi, who are greats of the sport and already have huge values on their cards, Haaland is the future, along with Kylian Mbappe.

I think particularly some of his limited parallels and autographed cards are soccer card investments that will very likely do extremely well in the future.

Even the original print version of his true rookie sticker, if kept in good condition, could fetch huge money down the line.

Haaland is already a superstar, and has a very bright career ahead of him.