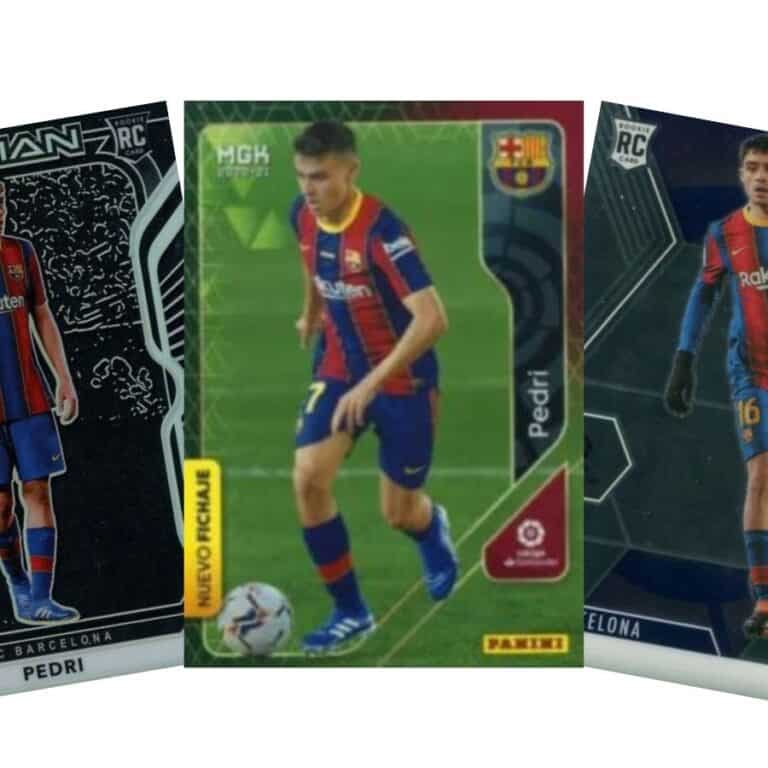 Pedro González López, who’s better known as Pedri to soccer fans, is one of the brightest young talents in the world right now.

It’s a testament to a player’s talent when they break into Barcelona’s senior team at just 17 years old, which is exactly what Pedri did.

The 2021 European Golden Boy award winner, is the standout player in a group of talented young players at Barcelona, including the likes of Gavi and Ansu Fati.

The technical midfielder started to establish himself in the Barcelona team at a time of rebuilding, after legends like Messi, Xavi and Iniesta moved on. While Barcelona might not have been the powerhouse team they were between 2010-2020, Pedri established himself at a young age after some very impressive performances for both club and country, and he’s widely considered as a potential future star.

Many soccer card collectors will have kept a keen eye on Pedri rookie cards, especially after he won the European Golden Boy in 2021. While He doesn’t have any cards from his rookie year, which was with Las Palmas, he has quite a few options from his first year with Barcelona, which are considered his rookie cards, with varying rarity and values.

So Pedri doesn’t have any cards from his rookie year (2019-20) with Las Palmas, he does, however, appear on a 2020-21 Emerson Royal Panini card, who played for Real Betis at the time, in his Las Palmas uniform – The action shot shows Pedri trying to tackle Emerson. The card doesn’t make the list of Pedri rookie cards to collect, because it isn’t his card, but it’s something to consider for collectors who want something from his time with Las Palmas.

Pedri cards could be a good soccer card investment play long term, if he goes on to realize his high potential – I’ve taken a look at 8 of the best Pedri rookie cards to collect in this article, in no particular order.

When Was Pedri’s Rookie Season?

The 2019-20 season was Pedri’s rookie year – He played for Las Palmas in the Spanish second division.

What Are The Best Pedri Rookie Cards? 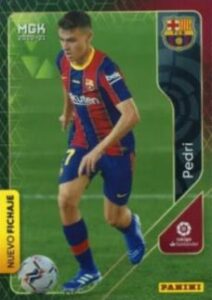 The Panini Megacracks brand is probably most well known for Lionel Messi’s 2004 rookie card, which is one of the most sought-after and valuable soccer cards in existence.

The 2020-21 set includes this Pedri rookie card, who also features in action for Barcelona, and while Pedri has a lot to do to reach the levels that Messi has, the card is one of his most popular rookies.

The card isn’t hard to get hold of – It’s a good entry level option for collectors. Unfortunately, there are no parallels. 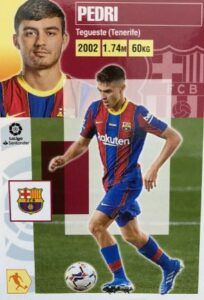 Stickers are a big part of the soccer card hobby – this is the only Pedri sticker to feature in this list.

Stickers are generally harder to find in good condition, compared to cards, but this Panini La Liga Santander Este Pedri rookie sticker was mass-produced and can be picked up relatively cheaply.

Panini soccer stickers are usually quite basic in design, but this one is a bit more busy – With 2 images of Pedri, the main one being him in action with the ball for Barcelona, and some attributes at the top. 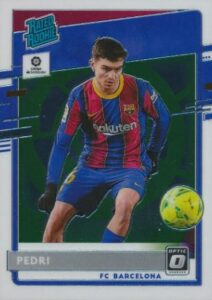 The Panini Donruss Rated Rookie lines are some of the most popular for rookies in sports cards.

This 2020-21 Chronicles Rated Rookie is arguably Pedri’s most sought-after and popular rookie card – The set includes an RC for most budgets, and this Optic version is a popular choice.

Another option which comes with numerous parallels, with varying scarcities and values. 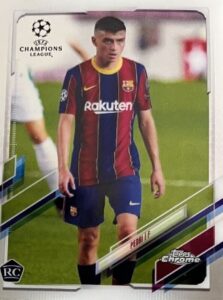 Topps Chrome UCL is one of the most popular soccer card brands. The Chrome UCL Pedri is one of his most sought-after and valuable rookie cards.

The 2020-21 Topps Chrome set not only expanded the Refractor rainbow, but also introduced RC logos in the base set for prospects who made their UEFA competition debuts, which included this Pedri card – Those changes to the set only increased the popularity and demand for the cards.

The card features Pedri in his Barcelona uniform, with a classic Topps Chrome UCL design to the card.

There’s a lot of different, popular, parallel options for collectors, with varying scarcity. 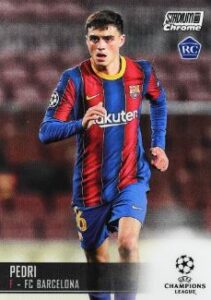 Another UCL themed chromium option for a Pedri rookie is the 2020-21 Topps Stadium Club card – the brand debuted that year.

The set features some nice looking card designs, and the base card, similarly to the Chrome UCL set, comes with numerous parallels, which are even nicer than the base card.

Overall, it’s a similar option to the Topps Chrome UCL card, but is a lot less expensive to buy, so it makes for a good alternative for collectors on a smaller budget. 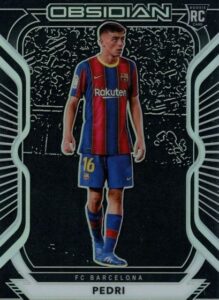 Another chromium Pedri rookie card option for collectors is the 2020-21 Panini Obsidian card.

Obsidian cards are considered more of a premium product, and this one is one of Pedri’s most valuable base rookie cards.

The base card itself is numbered and limited to 195 copies, and comes with numerous rare parallels, which hold more value, including the Red /5 and Blue Finite 1/1 parallels. 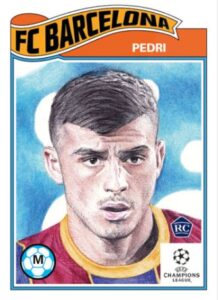 Topps Living UCL has become quite popular in the soccer card hobby – the cards offer something different in the design, with an artistic, hand-drawn style.

The print-on-demand set featured Pedri with this rookie card in 2020, and it’s a nice option for collectors. It had a lot of demand at the time of release, and ended up with a print run of 10,976, so it’s not exactly rare – This is one of the cheaper Pedri rookie cards. 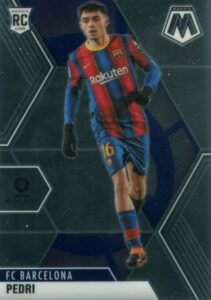 Prizm cards are popular for rookies in the sports card hobby, but Pedri didn’t have a card in the 2020-21 Panini Prizm set – Mosaic is similar, and offers the best alternative to Prizm, with the mass-produced chromium base cards, which come with a plethora of parallels with varying scarcity and value.

As I mentioned just now, the base card for this Pedri rookie is easy enough to get hold of, and an entry-level option in terms of value, but some of the rarer parallels sell for a lot more, partly because of the scarcity of them.