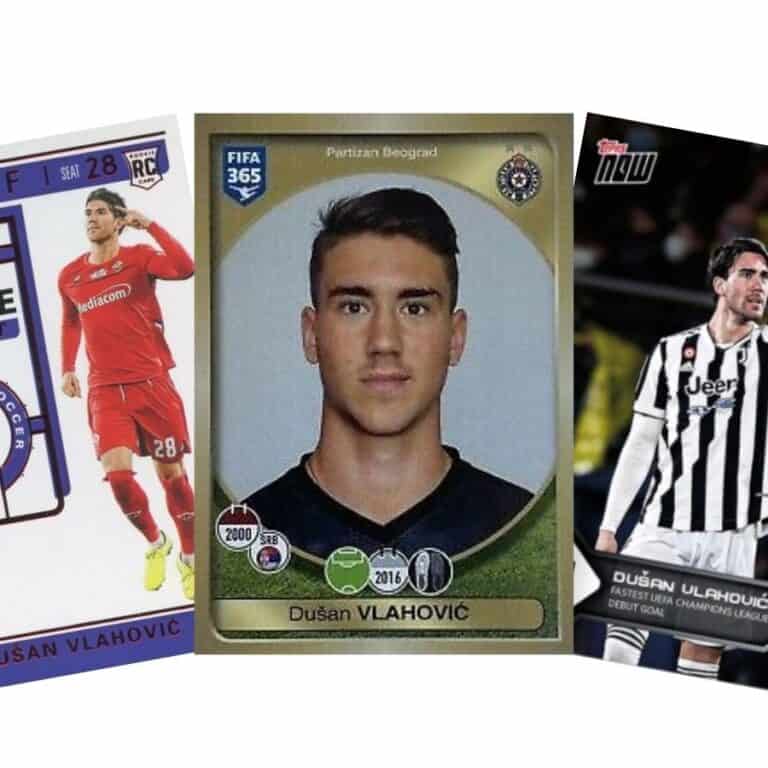 If you’re a fan of soccer, then you’ve probably heard the name Dusan Vlahovic by now.

The big Serbian forward (born in January 2000) is a goal machine, who first really made a name for himself with Italian side Fiorentina, in the Serie A, before moving to Italian giants, Juventus.

Vlahovic signed his first professional contract with Serbian team, Partizan, in 2015 at the age of just 15. His rookie season was the 2015-16 season – he started playing for the Partizan senior team around halfway through that season.

After a couple of years spent establishing himself in senior soccer, Vlahovic moved to Fiorentina in 2017, at the start of the 2017-18 season.

It wasn’t until the 2020-21 season that he started to catch the attention of the masses though. He scored an impressive 21 goals that year, which led him to win the Serie A Best Young Player award for that season, and also made his first appearances for his national team, Serbia.

Dusan started the 2021-22 season very strongly, scoring 20 goals in 24 games for Fiorentina before moving to Juventus for around $85m, in the January transfer window, half-way through the season.

In terms of soccer cards, Dusan Vlahovic went a little under the radar during the early years of his career, so he doesn’t have many cards or stickers at all from those early years – He’s one of the rarest modern rookies, who has the potential to become a star of the sport, so there could be great investment opportunity with Vlahovic rookies.

There’s no doubt soccer card collectors are chasing early Vlahovic cards, and the scarcity of options make them more valuable.

Let’s take a look at Dusan Vlahovic’s rookie card, and some of his other most valuable soccer cards. 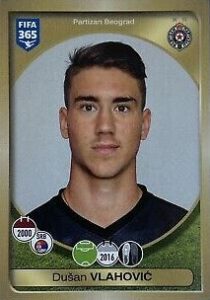 Dusan Vlahovic’s true rookie is actually a sticker from the 2016 Panini FIFA 365 set.

Panini stickers tend to have quite a plain design, with usually just a headshot image of a player, which is the same with this Vlahovic sticker – It shows an image of him during his Partizan days, with a nice gold frame.

It’s quite hard to get hold of one of these stickers in good condition, particularly in America – The PSA population report shows there’s very little of them in a grade 10, so if Vlahovic goes on to become a superstar, then those PSA 10’s could skyrocket in value.

I believe the sticker was released at least a couple of years before any other Vlahovic card or sticker, so that adds to its value for collectors who are keen to have an early Vlahovic issue.

Other Valuable Dusan Vlahovic Cards To Look Out For 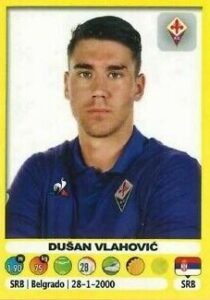 This is another sticker released by Panini – This time in 2018, when Vlahovic had moved to Fiorentina in Italy.

Again, as with most panini soccer stickers, it shows just a headshot image of Vlahovic, in his Fiorentina jersey.

Right now, this is worth a lot less than the true rookie sticker from the 2016 FIFA 365 set. It could be a good alternative if you’re looking for an earlier Vlahovic sticker/card, without paying top prices, but seeing as it’s a sticker which isn’t his true rookie, it’s not massively sought after in the hobby. 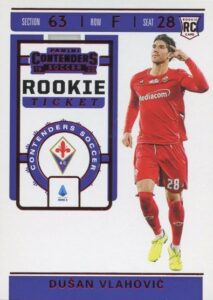 The 2019 Panini Rookie Ticket Vlahovic is arguably his most popular card among soccer card collectors.

I believe it’s his first card, as opposed to his earlier stickers. Cards obviously appeal to the wider hobby, who aren’t used to stickers – Those coming into soccer cards from football or basketball, for example, are more familiar with cards, so likely view this card as the Vlahovic item to have.

It certainly holds good value already, partly due to its scarcity – there’s thought to be around 2,500 total cards. The card has a base version, as well as the rare Cracked Ice and Red versions, which hold even more value.

I think Vlahovic could compete with the likes of Haaland and Mbappe in the future. It all depends on how Vlahovic’s career develops, but this could be the soccer card to have right now, in terms of investment opportunity. 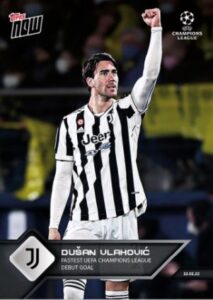 It didn’t take long for Vlahovic to make some history playing for Juventus. He made his first appearance in the UEFA Champions League in the 1-1 draw against Villereal, where he scored a goal after just 33 seconds – the fastest debut goal scored by a player ever in the competition.

To mark the achievement, Topps released this Dusan Vlahovic UCL Now card. According to Topps, the overall print run of the card was 335, which is surprisingly low considering it was print-to-order.

I can see this card rising in value over time, and being very popular, particularly the parallels – So it’s one to get hold of if you can.

I mentioned earlier that Vlahovic has gone a little under the radar in the soccer card hobby during the early stages of his career, but I think he represents a great investment opportunity in soccer cards.

He’s now playing for one of the biggest teams in world soccer, and therefore in the UEFA Champions League, which can hugely propel a player’s reputation.

He’s also scored the fastest Champions League debut goal ever, and he’s establishing himself as one of the best forwards in the world, up with the likes of Kylian Mbappe and Erling Haaland.